Who is a candidate for a Breast Lift procedure?

A Breast Lift (Mastopexy) procedure is a surgical option for patients wanting to lift the breasts, remove loose skin, correct low nipple position, and improve the overall shape of the breasts. Dr. Vincent’s comprehensive approach to breast lift surgery addresses size, shape and ideal nipple position for each individual body type.  He takes time to understand the goals and expectations of each patient.  We recommend breast lift surgery for men and women who are in good health, do not use nicotine products (including smoking, vaping and other forms), have realistic expectations and do not have any other medical conditions that may complicate surgery or recovery. Surgeries are performed onsite in our AAAHC accredited surgical facility. Surgery price quotes include all surgical fees including anesthesia.

Why Get a Breast Lift?

Many women seek mastopexy because pregnancy and nursing have left them with stretched skin and less volume in their breasts. However, if you’re planning to have more children, it may be a good idea to postpone your breast lift. While there are no special risks that affect future pregnancies (for example, mastopexy usually doesn’t interfere with breastfeeding), pregnancy is likely to stretch your breasts again and offset the results of the procedure.

Breast Lift Before and After Photos 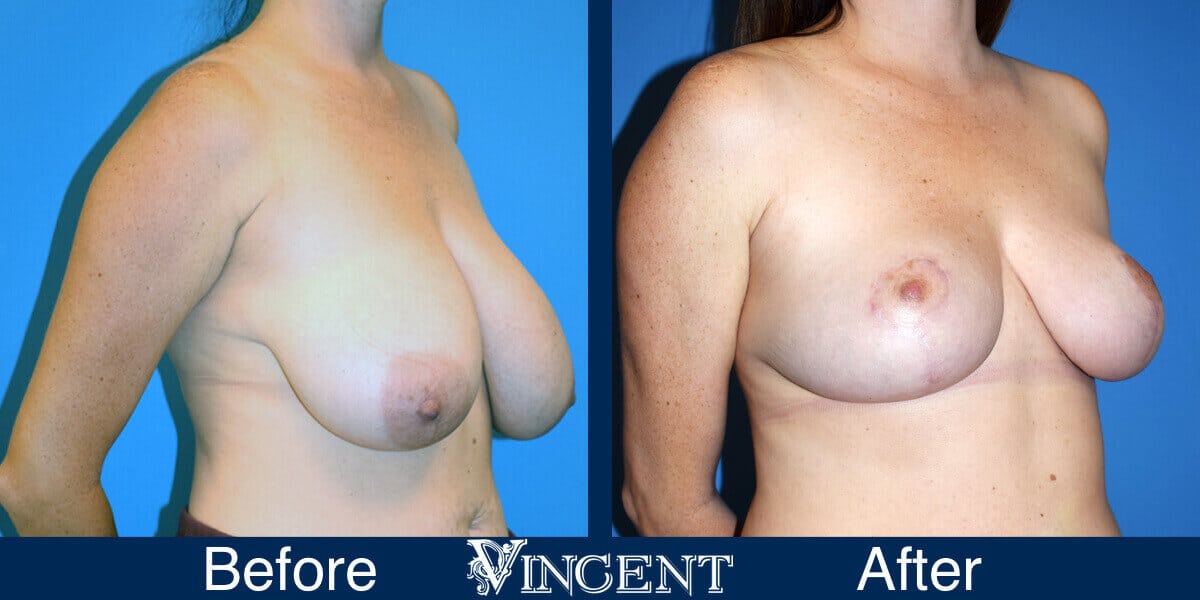 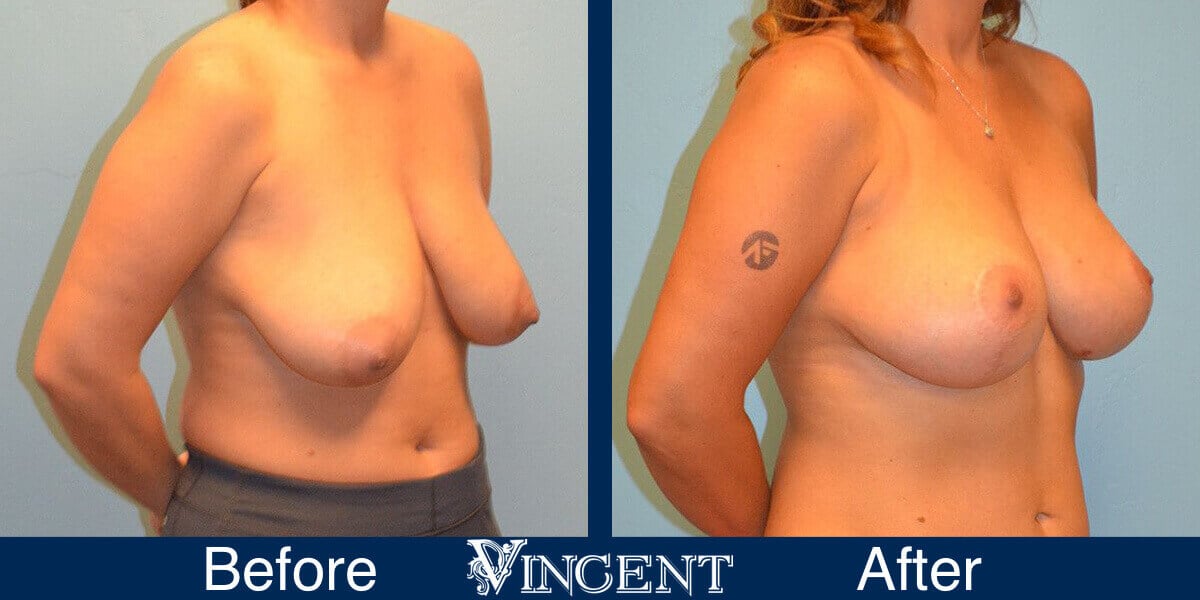 Dr.Vincent is the most kind, meticulous and skilled cosmetic surgeon in Utah. He goes way beyond what any other doctor would do, sometimes with no fee, in order to create the most perfect version of his patients. His perfectionism shows in the quality of his work. #drakevincentrealisticallyamazing

After going to multiple consultations, I finally decided to go with Vincent Surgical Arts and couldn’t be more satisfied with my results. The staff go above and beyond to ensure that I am comfortable and taken care of. My results are better than expected. If you want quality results at a good price, schedule a consultation today, you’ll be glad you did!

Enjoy your new beauty for years to come

Our partners have flexible plans with as low as 0% APR

To reduce recovery time and scarring

Thanks to talented surgeons with decades of experience

Before the Breast Lift Surgery

Your surgeon or his personal and thoroughly trained Surgery Consultant will discuss the procedure of a Breast Lift with you. They will examine your breasts and measure them while you’re standing. Next they will discuss the variables that may affect the procedure–such as your age, the size and shape of your breasts, and the condition of your skin–and whether an implant is advisable. Your safety is our main concern. You will also discuss where the nipple and areola will be positioned; they’ll be moved higher during the procedure and should be approximately even with the crease beneath your breast.

Depending on your age and family history, you may be required to have a mammogram (breast x-ray) before surgery. You’ll also receive specific instructions on how to prepare for surgery. This includes guidelines on eating and drinking, smoking, and taking or avoiding certain vitamins and medications.

Am I a Good Candidate for Breast Lift Surgery?

The best candidates for mastopexy are healthy, emotionally-stable women who are realistic about what breast lift surgery can accomplish. The best results are usually achieved in women with small, sagging breasts. Breasts of any size can be lifted, but the results may not last as long in heavier breasts.

How Much Does a Breast Lift Cost?

The cost of a breast lift is going to vary by patient. Please schedule a breast lift consultation so that we may answer this and any other question you may have. If financing is something that you would like to consider. We have developed relationships with Key Bank, Zions Bank, and Care Credit to help you realize your breast lift goals in an affordable and flexible way that best serves you.

During the Breast Lift Surgery

Breast lifts are usually performed under general anesthesia on an out-patient basis. The surgery is performed at our state-of-the-art surgery suite.

Mastopexy usually takes two to three hours to perform. Techniques vary, but the most common procedure involves an anchor-shaped incision following the natural contour of the breast.

The incision outlines the area from which breast skin will be removed and defines the new location for the nipple. When the excess skin has been removed, the nipple and areola are moved to the higher position. The skin surrounding the areola is then brought down and together to reshape the breast. Stitches are usually located around the areola, in a vertical line extending downwards from the nipple area, and along the lower crease of the breast.

Some patients, especially those with relatively small breasts and minimal sagging, may be candidates for modified procedures requiring less extensive incisions. One such procedure is the “doughnut (or concentric) mastopexy,” in which circular incisions are made around the areola, and a doughnut-shaped area of skin is removed.

After the Breast Lift Surgery

After surgery, you’ll wear an elastic bandage or a surgical bra over gauze dressings. Your breasts will be bruised, swollen, and uncomfortable for a day or two, but the pain shouldn’t be severe. Any discomfort you do feel can be relieved with medications prescribed by your surgeon.

Within a few days, the bandages or surgical bra will be replaced by a soft support bra. You’ll need to wear this bra around the clock for three to four weeks. The stitches will be removed after a week or two.

You can expect some loss of feeling in your nipples and breast skin, caused by the swelling after surgery. This numbness usually fades as the swelling subsides over the next six weeks or so. In some patients, however, it may last a year or more, and occasionally it may be permanent.

Getting Back to Normal – The Healing Process

Healing is a gradual process. Although you may be up and about in a day or two, don’t plan on returning to work for a week or more, depending on how you feel. And avoid lifting anything over your head for three to four weeks. If you have any unusual symptoms, don’t hesitate to call our office.

We will give you detailed instructions for resuming your normal activities. You may be instructed to avoid sex for a week or more, and to avoid strenuous sports for about a month. After that, you can resume these activities slowly. If you become pregnant, the operation should not affect your ability to breastfeed, since your milk ducts and nipples will be left intact.

How Long Does a Breast Lift Last?

You should keep in mind that a breast lift won’t keep you firm forever–the effects of gravity, pregnancy, aging, and weight fluctuations will eventually take their toll again. Women who have a breast augmentation along with their breast lift may find the results last longer.

Will I have Scars Following a Breast Lift?

Your surgeon will make every effort to make your scars as inconspicuous as possible. Still, it’s important to remember that mastopexy scars are extensive and permanent. They often remain lumpy and red for months, then gradually become less obvious, sometimes eventually fading to thin white lines. Fortunately, the scars can usually be placed so that you can wear even low-cut tops.

What Are The Risks of a Breast Lift?

A breast lift is not a simple operation, but it’s normally safe. As with any surgery, there is always a possibility of complications or a reaction to the anesthesia. Bleeding and infection following a breast lift are uncommon, but they can cause scars to widen. You can reduce your risks by closely following your pre-op and post-op instructions.

Mastopexy does leave noticeable, permanent scars, although they’ll be covered by your bra or bathing suit. (Poor healing and wider scars are more common in smokers.) The procedure can also leave you with unevenly positioned nipples, or a permanent loss of feeling in your nipples or breasts.

What Are Some Complementary Procedures for a Breast Lift?